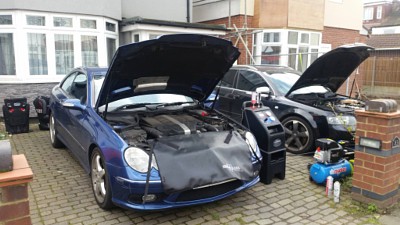 Umar had his Mercedes CLK 209 Terracleaned and now says the car is much more responsive and smoother.

Benefits of a Terraclean Carbon Clean on your engine

The side effect of burning carbon based fossil fuels in your engine is carbon builds up inside affecting your engine performance.

Dirty injectors can’t atomise the fuel finely enough for a good clean combustion and dispels unburnt fuel out through the exhaust and burns inside the catalytic converter, shortening the life and increasing higher hydrocarbon emission levels.

Terracleaning fuel injectors will remove the varnish and carbon from the injector tips and intake valves allowing for a good clean combustion, reducing octane requirement and improving idle and drive-ability.

Terraclean will remove the carbon build-up on the O2 sensors.  These sensors send information to the ECU which controls fuel mixture, air flow rate.  Dirty sensors will give wrong information to the ECU and unnecessarily alter settings which will give poor performance, poor fuel economy and excess pollution.  Terraclean will remove varnish and carbon from the sensors thereby increasing restoring fuel economy and regaining performance.

Proper vehicle maintenance should never be overlooked.  De-carbonisation can increase fuel economy by 4-15% however fixing a faulty sensor may increase as much as 40%.

The Terraclean procedure will clean the combustion areas, valves and injectors thereby ensuring an efficient combustion, ensuring that all fuel is burnt and not wasting it into the Catalytic converter.  This will decrease the load on the converter and prolong its life.